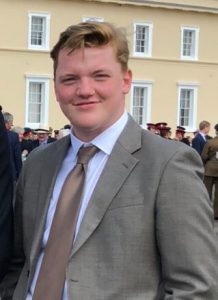 A Few Words from the Winner

“I grew up surrounded by stories, and my passion for writing developed from there. Storytelling is so important as it provides us with an alternate, more human perspective of events, allowing us to access and understand different people and ideas. The more I write, the more my understanding and reverence for the craft grows – and I’m hoping to get more time to write in the future. I’ve just completed the final year of my degree in English and winning the Fresher Writing Prize has given me the confidence to pursue Creative Writing to masters level. I have aspired to be an author for sometime, and this has also provided me with the drive to pursue that.”

The day was crisp and, despite the grey skies, the sun was eagerly awaiting a chance to break through. Starlings swarmed over the crest of a near hill, out toward the next bay; twirling and diving as they flew. Seán Dillon often wondered why the birds flocked in such an appealing way. They reminded him of home.

‘Will that be all?’ The melodic tones of the girl behind the counter brought him back to earth.

‘The sandwich, is that all that you wanted?’ Dillon turned towards the girl. She was beautiful, she had bouncy brown hair, emerald eyes and a voice that echoed the songbirds of Kerry. The girl was smiling coyly at him, the playful smile of someone who wanted to be anywhere other than behind a sandwich bar.

He put down the money for his sandwich and turned. The appropriate thing to do now would be to find his table and get into his lunch but he didn’t want to leave. He wanted to do something that he knew he shouldn’t. With a new courage, he turned back, ‘What’s your-‘

Well, if that wasn’t the prettiest name he’d ever heard, Seán didn’t know what was. He replied with his own and, after a small discussion of their respective origins, left with the half-promise of later acquaintance.

Anthony Harper, Seán’s partner for the job, sat with one leg over the other deep in thought as Seán approached the table. Harper was wearing a newsboy hat instead of the usual flat-cap because he thought the flat-cap was ‘too anglophilic’. He was a crowd pleaser back in Galway. He had true republican gristle, being the veteran of 20 years of sectarian fighting and his flame had only brightened in recent years. He reminded Seán of his grandfather; proud, cold and idealistic.

‘Admiring the local fauna I see?’

‘The starlings,’ Harper continued, ‘over that hill over there, they’re quite beautiful aren’t they?

‘Ah yes, the starlings, of course, they reminded me of something from home.’

‘That’s exactly it,’ said Harper, ‘those are European starlings…’

‘So, they don’t belong here. Some genius from New York let 100 of them loose into North America, and they’ve been ravaging local bird populations ever since.’

‘They are pretty though Anthony.’

‘That’s not the bloody point, Seán. The point is the idea of the foreign invader, a more populous invader coming to an untouched, beautiful land not unlike Newfoundland and tearing it apart, tearing families apart. Why not the birds of Joyce, or Yeats? Bloody Anglicans, can’t trust them as far as you can throw them.’

It still amazed Seán how one man’s entire existence seemed to revolve around hatred of the English, and the Scots by extension. He wondered what would happen to men like Harper if Ireland was ever reunited, whether they would settle and raise a family or would they go on fighting? Sean felt like he knew the answer. Harper reached for a cigarette and Seán knew they about to have the conversation he had been dreading; Harper always began talking ‘business’ when he lit a cigarette.

‘Our man here has made contact with us and we’re meeting him soon – his name is Conroy. He says to meet him when the church bells ring out for 6 o’clock and by my watch it’s currently quarter past 2. So, we’ll make ourselves busy about St John’s for the next few hours and convene on the church for then. Sound good?’

‘Yes Seán, to get the guns,’ said Harper, exasperated.

A church is the best and worst place for a meeting such as this to occur, thought Seán later, as he stood smoking below the bell tower. On the one hand, where better place to hide clandestine meetings amongst Irishmen than a church? Yet, on the other hand, Seán had to reconcile himself with the fact he would be under God’s roof, while discussing and preparing to kill another human. What would Ma say if she could see me now? Before he could answer, he heard the church door swing open behind him along with the cocking of a weapon.

It was the code, the countersign Seán had been told to use when meeting their contact, but with the surprise, his response slipped out of his memory. Where was Harper? If he didn’t remember it soon, he knew what would come, a bullet in the back and a boggy grave. Finally it came to him.

‘Faugh an Beallach,’ he replied and the weapon uncocked prompting Seán to turn around and see his potential killer. To his surprise, Conroy was a man of the cloth, a clergyman. He wore black robes with a dog collar and had a short, smart haircut.

There was still no sign of Harper, but Sean followed the priest into the church, into the back rooms, reserved for members only. It was basic, as he expected, with nothing in it besides a small table with a cloth draped over it and a small bookshelf filled with religious tomes and light fiction.

‘What is your name, son?’ The priest spoke with a light Dublin accent, chiselled by decades across the Atlantic into some hybrid form.

Sean gave his name and the priest said little after that, so Seán assumed he meant to wait for Harper, the more senior partner, before discussing business. Shortly, footsteps announced Harper’s arrival, and he appeared, apologising for his lack of bearings in the new town.

‘Let’s get straight to it, lads,’ he said, reaching into a pocket and pulling out a picture. ‘This is your target.’

The grainy photo showed a somewhat haggard, elderly man looking back whilst crossing the road in St John’s. This was General Sir Thomas Ingram, commander of the force in the south during the war of independence. And the man Seán had been sent to kill.

‘That’s him? The Butcher of Mullingar?  He looks older than my grandpa?’

‘That he might’, there was gruel in Harper’s voice. ‘But it doesn’t change the fact he probably cost Ireland a few thousand good men and women in his day.’

‘Yes lads, he’ll be eating lunch early tomorrow in the square, near all the cafés, like he always does on Sundays. He’ll be a sitting duck. But I must ask one thing of you lads.’

This was the first time Conroy had looked directly at the two hitmen. ‘Maybe it would be best if you just packed your bags and went home? The streets of St Johns are so far untouched by all this senselessness and, as father, it is my job to keep it that way.’

‘Go home, go home?’ said Harper. ‘We travel half way across the bleeding world and you tell us to go home? Look, I know you got some important friends back home, but this ain’t Ireland Conroy, they can’t help you here and they certainly can’t stop us from our date with destiny. Now, you’re either with us or against us, father. So, give us the materials – or the next sermon you’ll be giving will be from a wheelchair.’

Conroy looked carefully at Harper, but then got up, unlocked a box at the back of the room and handed the two their firearms. Sean turned his over in his hand. It was a British service revolver from the second war, a fitting end to an old general, he supposed. Harper stood and indicated it was time to go. They had to prepare for tomorrow’s events.

Sean didn’t sleep but was up with Harper the next morning, his pistol in his jacket pocket. They walked to the square in silence, Harper had a look of quiet determination on his face – he knew what he had to do. Sean, however, couldn’t get the father’s words out of his head: ‘senselessness’. That was exactly what it was. This was what he’d grown up around, senselessness. But now, it was finally making sense for the first time.

His thoughts were interrupted by a nudge in the ribs from Harper, and his stomach turned. There, sitting in the square, was the general, if he could be called that. Ingram looked even older in person and Sean knew instinctively that this ‘job’ just wasn’t right. But Harper was already making a path for the general with his hand reaching inside his jacket, Seán had to do something.

He stepped in between Harper and Ingram, raising his sidearm so it was pointing at Harper’s head. ‘Don’t do it Harper. We can do like the father said, and  leave now, forget all of this.’

‘He’s an evil man Seán, get your head out the fucking clouds! Think about how many men are dead because of this man, think how many fell by his hand.’

‘It doesn’t fe-. You want to talk about feelings? Why don’t you go to the graves of the 20 innocent boys from Cork and ask how they feel about the matter?  Christ Sean, Tuam is a thousand miles away, it’s time you woke up!’

‘It’s men like you who cause the suffering, not him, what happened was 40 years ago, why can’t you just let it go?’ Sean cocked his revolver.

‘Shoot me then ye damn fool, or don’t you have the fucking minerals?’

The shot rang out across the square and faces turned to the scene. Harper fell flat on his back, the same signature bemusement and anger still on his face. Beyond Harper, Seán saw the girl with the emerald eyes, Róisín, staring back at him and Seán thought that was the prettiest thing he’d ever seen. He stood for what felt like years in the road, looking, until he heard footsteps approaching from behind, a revolver cocking and then an English voice:

The shot rang out and there was silence.